EKKAH are so names because they are fronted by Rebecca Wilson on lead vocals and guitar and Rebekah Pennington on Keys, Sax and vocals. 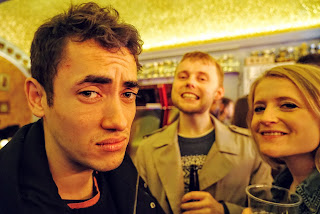 I last saw EKKAH almost a year ago at Total Refreshment Center.

This time I went along with +Matthew Tyzack (who had a cold), +Rebecca Tyers and +Robert Haubus. Thanks for the invite guys!

The gig was at Moth Club, which isn't a venue I been to before.

I liked the venue: reviews for it are sparce and short, ranging from "Great venue", "Stickiest floor in the universe" to "Great ceiling". The later I heartily agree with.

Panorama of Moth Club with the support band playing, who's name I didn't catch soz.

I enjoyed EKKAH's set. I'd clasify their music as fun catchy underground disco pop, with good musical hooks. They performed well and have obviously worked hard at presentation, visually and with choreographed dance routines. My only gripe would be that they didn't play very long: about 35 mins if I recal rightly.

For those who didn't make it here's an audio visual taste from the gig. Not great quality, but should get your foot tapping.

Good luck EKKAH. See you next time you're in town.